Validation of the Test Review Commission (TRC) of the type 1 On-Board/Ground transfer systems and start of the combined tests of the lower stage fuelling elements. 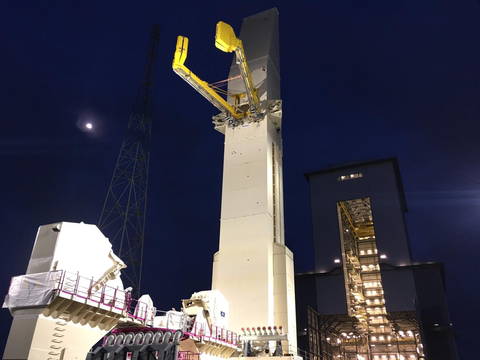 On Wednesday, May 4, the French space agency (CNES) validated the Type 1 Test Review Commission (TRC) for the Ariane 6 launch vehicle’s On-Board/Ground transfer systems. This validation attests that the performance and reliability specifications of the upper and lower stage fuelling elements have been met.

It took six years of hard work on both sides of the Atlantic to achieve this outstanding result.

WHAT’S NEXT: COMBINED TESTS OF THE CRYOGEN CONNECTION SYSTEMS (CCSs) START UNDER THE DIRECT AUTHORITY OF THE EUROPEAN SPACE AGENCY (ESA).

These tests simulate a “cold” disconnection of New Generation Refueling Modules chambers and the interface parts (FCB: Fluidic Connection Box) that are attached to the launcher. These tests validate the proper circulation of cryogenic fluids (liquid oxygen = -183°C and liquid hydrogen = -253°C), and check the influence of these temperatures on the stresses undergone by the launcher’s interface parts (FCB), before the launching.

These tests are the last operating tests of the firing point on its own.

The next qualification stage will be carried out with the representative Ariane 6 model, currently being assembled in the Launcher Assembly Building.

VERY WELL DONE to all the Latesys teams – Groupe ADF, Air Liquide, Cegelec, and much gratitude to the CNES for its trust and unconditional support.

This website uses cookies to improve your experience while you navigate through the website. Out of these, the cookies that are categorized as necessary are stored on your browser as they are essential for the working of basic functionalities of the website. We also use third-party cookies that help us analyze and understand how you use this website. These cookies will be stored in your browser only with your consent. You also have the option to opt-out of these cookies. But opting out of some of these cookies may affect your browsing experience.
Necessary Always Enabled

Any cookies that may not be particularly necessary for the website to function and is used specifically to collect user personal data via analytics, ads, other embedded contents are termed as non-necessary cookies. It is mandatory to procure user consent prior to running these cookies on your website.